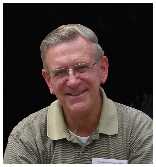 Captain, Judge Advocate General's Corps, U.S. Navy (Retired). Frank is a direct descendant of Judge Samuel Swayze through his son, Israel Swayze, a brother of Richard Swayze and the Rev. Samuel Swayze.  Currently living in San Diego, Frank enjoys traveling nationally and internationally.  Since 1965 his big time-consumer is collecting vintage radio programs. He's catalogued over 7,000, but that doesn't really scratch the surface. The probable highlight of the collection at this point is 1 1/2 hours of NBC's coverage of Lindbergh's arrival back in the US from his 1927 trans-Atlantic flight, in incredible sound considering. It features Pres. Coolidge presenting him an award, and his address to the National Press.

James Lee Heath, III (1939-2009), served as President in 2008-2009, his term sadly cut short by his death while on vacation in Peru with his wife, Mary.  The son of James Lee Heath, Jr., and Alodi Blank Heath, he was a native of Monroe, Louisiana, and resided in Hattiesburg, Mississippi.  He was a descendant of both Richard Swayze and the Reverend Samuel Swayze.  Jim graduated from LSU with bachelor and master degrees and a Ph.D. He was a professor at the University of Maryland from 1970 to 1998.  He was a research professor and directed graduate students.  Jim was listed in Who's Who in America and Who's Who in the World, and was a member of Sigma Xi and Alpha Zeta.  He served honorably in the Army, attaining the rank of Captain in 1967.  Jim is buried at Port Hudson National Cemetery, Louisiana.

Jim, born in Amarillo, Texas, makes his home in Utopia, Texas, formerly in Dallas where he directed his engineering firm. Jim only discovered his roots to the DJS in 1987, but he now thoroughly enjoys the organization. Jim descends from Rev. Samuel Swayze through his grandson James Swayze's son, Alexander P. Swayze.

Katherine lives in Vancouver, Washington, across the river from her law offices in Portland, Oregon. Originally from Baton Rouge, Katherine and her family have been active in DJS almost from its inception in1940. She is a descendant of both Richard and Rev. Samuel Swayze.

K.C. Swayze served as our president from 1990 through 1996. He is a descendant of Rev. Samuel Swayze through his grandson James Swayze's son, Alexander P. Swayze. K.C. and his wife, Ruth, make their home in Wylie, Texas, near Dallas, where K.C. is in the excavation business with his oldest son, Ken.

Pat Swayze Larson served as President from 1986-1990. Born in Texas, Pat lived in many States as an Air Force wife. After Gen. Larsen's retirement she worked as Legislative Assistant in the U.S. House of Representatives and now lives in Virginia where she is active with the DAR currently serving as a State officer. She descends from four Jersey Settlers families--those of Rev. Samuel Swayze, Richard Swayze, David Hopkins, and Job Corey.

William Aubrey Sojourner (1914-1985) served as the president for 26 years. He was born May 10, 1914 at Oakwood Plantation, Adams County, Mississippi, the son of Albert Boyd Sojourner and Katherine Aubrey Bailey. William earned his M.A. from the University of Mississippi. He was a teacher and principal of Kingston Consolidated School and served as Adams county superintendent of education for two terms. William was a Veteran of WWII. He served as the President of the Descendants of the Jersey Settlers until his death on September 15, 1985. He is buried in the Natchez City Cemetery, Natchez, Mississippi.

Daniel Smith Farrar  (1873-1964) was the president of DJS from its inception in 1940 until 1961. He was President Emeritus beginning in 1961. He was born in Kingston, Adams County, on October 26, 1873. At the age of eighteen, he became first lieutenant of Company B, First Regiment, Mississippi National Guard, during the Spanish-American War. After contracting pneumonia, Farrar received a medical discharge and returned to Mississippi in December of 1898. He married Mary Sue Aydelotte of Columbia, Tennessee, on June 27, 1909. She was the daughter of W. C. and Sarah Polk Cherry Aydelotte. The Farrars had one daughter: Sarah Polk (b. 1909). Mary Sue Aydelotte Farrar died in 1933, and Farrar married his second wife, Sallie Muir Stripling, on October 25, 1938. The Farrars resided on a plantation near St. Joseph, Louisiana, in 1952, and they later moved to Shaw, Bolivar County, Mississippi.